The Problem of E-Waste

With tons of gadgets, devices, video games, and computers being disposed of every single day across the globe, electronic trash (or e-waste) is becoming the biggest source of waste in the world.

The ever-increasing demand for the latest technology has dramatically shortened the service life of smartphones, wearable technology, game consoles, personal computers, and other electronic devices that we use in daily life, is leading to a huge pile of hazardous e-waste.

It is a Frankenstein in the making, created out of our insatiable desire to meet the demands of our modern consumerist lifestyle. Disturbingly, it is fast getting out of our control. If not managed expeditiously and on a war footing then it may burry us all under its massive weight, sooner or later.

The problem of e-waste is an ever-escalating crisis that poses a serious challenge to public health and one that puts our environment at risk. Operation 8-Bit is tackling this issue head on by giving old equipment a new life, and helping to protect our environment at the same time.

Yes, E-waste and its increasingly unmanageable volume are giving sleepless nights to corporations and civic bodies world over. By every aspect of the gargantuan proportion of the problem E-waste has thrown up a plethora of challenges that have a direct bearing on the overall well-being of the mankind, planet earth and environment.

Did you know that by 2020, there will be an estimated 50 billion digitally connected devices in the world, compared to today’s 15 billion? Computers, smartphones, and tablets top the list, with wearables as the new hot product to flood the digital device market. As consumers, we can look forward to added convenience and connectivity, as recycling advocates… not so much.

Consider these other current and historical facts and figures about e-waste.

About 4 percent of discarded electronics are known to be thrown into landfills; 76 percent, or 34.1 million metric tons, likely ended up incinerated, in landfills, recycled in informal (backyard) operations or remains stored in our households.

According to the EPA, every day we are get rid of over 416,000 mobile devices and 142,000 computers either by recycling or disposing of them in landfills and incinerators.

The EPA also states that e-waste represents only 2 percent of the solid waste stream, but the amount accounts for 70 percent of the hazardous waste which is deposited in landfills.

Around 40 percent of the heavy metals in U.S. landfills come from old and discarded electronics. If the recycling rates for gold (15%), silver (15%) and platinum (5%) increased to 100%, it would enable the electronics sector to realize $12 billion in natural capital and financial benefits.

Roughly 80 percent of e-waste generated in the U.S. is exported to Asia, a trade flow that is a source of considerable controversy.

Did you know that by 2020, there will be an estimated 50 billion digitally connected devices in the world, compared to today’s 15 billion? Computers, smartphones, and tablets top the list, with wearables as the new hot product to flood the digital device market. As consumers, we can look forward to added convenience and connectivity, as recycling advocates… not so much.

How You Can Help

By donating your used gear to Operation 8-Bit instead of throwing it in the trash bin, you are helping to conserve natural resources and avoid air and water pollution. Our Ready, Restore, Replay program gives that old equipment an extra life and helps others to level up in the process.

Unfourtunately, not all of the equipment we receive can be refurbished. So as part of our commitment to help the environment, Operation 8-Bit works directly with reputable recyclers to ensure that what we don’t use is properly disposed of to fulfill our pledge of keeping e-waste out of our landfills.

Donating your old computer or video games to us is easy, simply follow this link to start the process today.. 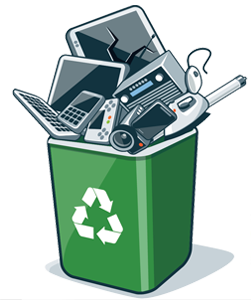 Working together for a cleaner environment.

Want to learn more about e-waste and the impact it is having on our environment? Please visit these websites or contact our sponsor. (All links open in a new window)

According to this report from 2013, the world's e-waste -- discarded smart phones, iPads, and televisions -- was expected to grow by 33 percent to 72 million tons by 2016. Dan Ackerman, editor at CNet, joined "CBS This Morning: Saturday" on how to combat this troubling trend.